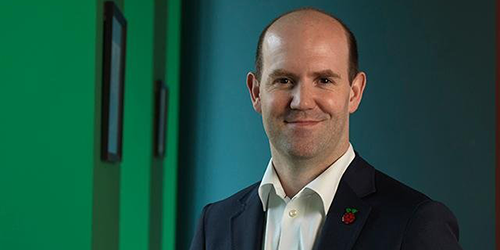 Eben Upton has done a little bit of everything: he has degrees in physics and engineering, computer science, and business, has worked as an entrepreneur and for big companies, and now splits his time between business and technical responsibilities as the CEO of Raspberry Pi (Trading), a subsidiary of the Raspberry Pi Foundation that acts as its technical development and commercial branch. It’s a position that suits Upton’s diverse talents and interests well. Upton says Raspberry Pi offers him a balance between high-level decision making and the secure backing of a big company, as well as between technical and business focuses. “At Raspberry Pi,” he explains, “I get to do a little bit of both.”

That must sound like an enviable job to the countless hobbyists and students who love the Pi. Luckily for them, it’s precisely those sorts of people who are best equipped to go on to work for Raspberry Pi, Eben says. Passion projects are a source of real programming experience, something Eben says Raspberry Pi looks at closely when hiring from a pool stuffed with academics. “The best people,” he explains, have “the theoretical underpinnings but also practical experience”

Eben shared these thoughts and others in an interview with The Pi. Read on for his thoughts on his career’s arc, his favorite Pi projects, and the future of the world’s most important single-board computer.

Eben Upton on his favorite days on the job

Of course, the disappointing thing about the Raspberry Pi offices [in Cambridge, U.K.] is that we don’t make Raspberry Pis there! We design them. …but then there are those days when I actually get to go to the factory [in South Wales] and watch units coming off the line. I probably get to do that four or five times a year, and those are always standout days.

Most of the Foundation’s employees are in Cambridge, but the CoderDojo team is based in Dublin. [Editor’s note: the merger of the U.K.-based Raspberry Pi and the Ireland-based CoderDojo happened just a few months ago.] And we have three people in North America, based in San Francisco.

Decision-making for hardware features is kind of distributed. I guess I’m the final arbiter of what goes in, but I don’t have to arbitrate very often, because we have a great team. By and large, it’s obvious what we’d want to do: the high-level features kind of write themselves, because we have this very aggressive cost target of $35. So with those pricing constraints, it’s been a long time since there’s been any real debate about high-level features. If it was twice the price, there would be more freedom to choose, and likely more disagreements.

On the Raspberry Pi’s biggest areas of focus right now

On the technical side, it’s software. We tend to swing back and forth between hardware and software. We did the original design, then we did a couple years of software to squeeze performance out of that. Then we did the Raspberry Pi 2 and Raspberry Pi 3. And now, since we have a good, stable, performant platform, we’re focused on software again.

The business side is about making the Raspberry Pi available in more countries. And on the charitable side, it’s finishing off rolling out our programs the UK. …and then overseas. Asking ourselves what aspects of what we do in the U.K. we can do in North America, in Germany, or in Africa.

On advice he’d give students starting out in computer science

Well, I can tell you about who we hire, and who we don’t hire. You have to write your own computer programs. I mean, you see people coming in and applying for jobs who have never written a computer program that they didn’t have to write as part of a course. And you very rarely find someone like that who’s really good, really capable. The people who are good are the people who have some academic experience, but that also have the passion projects … the best people have that, the theoretical underpinnings but also practical experience.

In terms of exciting new fields, they all depend on basic skills. I started off writing games, and now I run a company that makes hardware. But the basic engineering and analytical skills that are applicable to one are applicable to another. So – what’s hot right now? AI is hot right now, but who knows what will be hot in ten years’ time? So my advice to people starting out is to focus on getting the basic skills. They’ll be useful regardless of what’s hot.

Both! As an employee of a large company you have access to enormous resources, if you can win the argument about how they should be deployed. But as an entrepreneur, you have access to the autonomy which is only available to the top employees of a large company For any given task, there’s a trade-off. And the way things work at Raspberry Pi, I get to do a little bit of both.

I’m going to say both again [laughing]. We have a great team, so I don’t have to do all the technical stuff (not that I ever did, even in the early days).

On his favorite Raspberry Pi projects

What I’ve really enjoyed the past year is seeing what [users] do with AI… there was a Japanese guy whose parents had a cucumber farm and was taking the cucumbers in a box and categorizing them. And there were something like 23 different categories of cucumber, based on how fresh they were, how big they were … how many lumps they had on the outside of them.

[Editor’s note: here’s the project Eben is referring to. Japanese cucumber farmers determine their own categories, so they can be quite complicated and specific.]

But he took TensorFlow [Google’s machine learning software library] and taught it to recognize the cucumbers… all using his mother’s classification. And after a while he trained it. And it was pretty good! So that’s kind of example of the AI stuff, what’s next.

On Raspberry Pi’s place in a growing and competitive market

It’s good that there’s diversity, right? I mean, there’s some part of you that would want that industry to yourself, but I think every other new product that appears drives us forward.

On the future of Raspberry Pi accessories

On the future of Raspberry Pi hardware

I think this is a question that is going to come up over the next several years. We know what the asks are: more memory, more processing power, more communication bandwidth… You know – more.

So I don’t think you’ll see any discontinuity in our product roadmap. So I think what you’re likely to see in the future of Raspberry Pi is us doing what we do, but more of it.

How to create a Raspberry Pi thermometer using the Sense HAT

Be the first to comment on "Interview with Eben Upton, CEO of Raspberry Pi (Trading) Ltd."