How to install Raspbian on the Raspberry Pi

A word about NOOBS

It’s worth noting that the method described here isn’t your only option for installing Raspbian. You can also opt to use NOOBS, an operating system installation manager that makes it easy to install Raspbian, as well as a few other operating systems. If you really want to make things easy, you can even buy SD cards that come pre-loaded with NOOBS. For a bit more on that, check out our post on how to install NOOBS on the Raspberry Pi.

I promised to show you how to install Raspbian on the Raspberry Pi, so it’s about time that we got started! First things first: hop onto your computer (Mac and PC are both fine) and download the Raspbian disc image. You can find the latest version of Raspbian on the Raspberry Pi Foundation’s website here. Give yourself some time for this, especially if you plan to use the traditional download option rather than the torrent. It can easily take a half hour or more to download.

The Raspbian disc image is compressed, so you’ll need to unzip it. The file uses the ZIP64 format, so depending on how current your built-in utilities are, you need to use certain programs to unzip it. If you have any trouble, try these programs recommended by the Raspberry Pi Foundation:

Step 3: Write the disc image to your microSD card 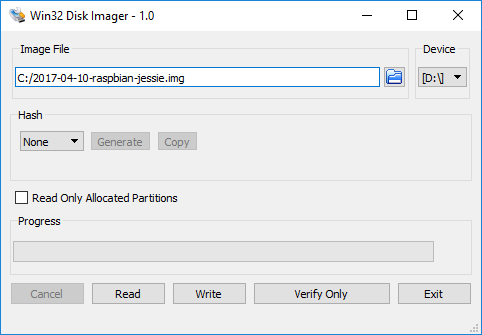 Next, pop your microSD card into your computer and write the disc image to it. You’ll need a specific program to do this:

The process of actually writing the image will be slightly different across these programs, but it’s pretty self-explanatory no matter what you’re using. Each of these programs will have you select the destination (make sure you’ve picked your microSD card!) and the disc image (the unzipped Raspbian file). Choose, double-check, and then hit the button to write.

Step 4: Put the microSD card in your Pi and boot up

Once the disc image has been written to the microSD card, you’re ready to go! Put that sucker into your Rasberry Pi, plug in the peripherals and power source, and enjoy. The current edition to Raspbian will boot directly to the desktop. Your default credentials are username pi and password raspberry.

How to install NOOBS on the Raspberry Pi

How to listen to Spotify on the Raspberry Pi